Blast from the Past...A Man After Midnight 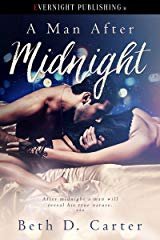 Caroline Grace has been invited by her best friend, Aldy, to New York City.  Needing a vacation because her marriage is almost finished, she jumps at the chance to relax and perhaps take the advice of her friend for a no-strings weekend fling.  Feeling too restless to sleep, she is down in the hotel bar when a drunk patron tries to pick her up.  Feeling disgusted, she leaves, only to be accosted by him.  She is saved by the very handsome Wren Calder, Aldy’s boss, who seems to immediately recognize what makes her tick.

Caroline is immediately swept off her feet by the powerful attraction she feels toward him.  She doesn’t hesitate to indulge in a one night stand, but Wren has other ideas.  He proposes a no strings weekend fling and Caroline decides it’s just what she needs to get over her divorce.  Wren slowly frees her inhibitions, opening her to a sexuality Caroline has long denied herself.

Overshadowed by the mistake she made in the past, Caroline leaves at the end of the weekend vowing to forget him. But she soon comes to the conclusion that getting over Wren is going to be a little more difficult than she thought, because she realizes just how much she’s fallen in love.

The idea for this book came from a trip to New York I took back in 2009. A lot of stuff I did I was able to use in the story, including the Ferris wheel I rode in the toy store! So I had this idea already forming, however, I did let the romance part flow naturally.

Side note: I was there for the attempted NYC subway bombing of 2009. In fact, I walked right by that car and asked the police what was going on and they told me they were checking fire hydrants.

The beginning, where Caroline and Wren meet. I reworked that scene a lot until it made sense.

Caroline’s friend, Aldy, is based on my best friend.

Clothing fell off, thrown haphazardly everywhere. Shoes tossed in various directions. Once naked, Wren grabbed her by the waist and raised her so she could wrap her legs around him.  Her panties and garter belt were still on but the dress and her strapless bra became casualties of passion.  His gripped her ass cheeks as he held her in place, his lips finding hers and as he thrust his tongue deep in her mouth.  Her sensitive nipples rasped against his chest hairs, bringing them achingly alive.

He fell back onto the bed, Caroline bouncing on top of him, her legs unwinding from his waist to straddle him.  A thin barrier of material separated his hard cock from plunging deep.  He ran a hand down her back, over her ass and down her legs until he found the snaps for her garter belt.  With a practiced touch he undid each tie until she was free of the stockings.  He broke the kiss and sat up with her still on his lap to ease off the stockings, one at a time.  Then he unhooked the belt from her waist and let it drop on the floor.

They stared into one another’s eyes as he traced a finger along the edge of her lace panties, dipping under the seam as her eyes flared in excitement.  He brushed over her clit, lightly caressing the nerve cluster until she undulated her hips. The pressure of his hard cock plus the caress of his fingers had her on the edge of self-combusting.  She leaned down and bit his shoulder, her teeth sinking into tight skin.  Wren hissed, and as he jerked in response to the pain, his cock banging forcefully against the material of her panties.  She liked his response but didn’t analyze too closely her gut reaction to inflict the bite.  Then the moment quickly fled as he flipped her onto her back, yanking the panties down her legs.

With a wicked grin, he took both her wrists in his hands and then tied them together with one of her stockings.  She raised an eyebrow but didn’t say anything, her arousal rising at the devilish promise shining in his eyes.

He licked and nipped his way down her body, paying close attention to each turgid nipple.  He sucked one peak into his mouth, laving it over and over with his tongue and teeth, while rolling the other between his fingers.  Caroline arched in pleasure, her legs falling open as if urging him to continue his exploration.  Her hands tested their bond, finding the silk stocking unbreakable which only intensified the thrill.

“Keep them there,” he ordered.