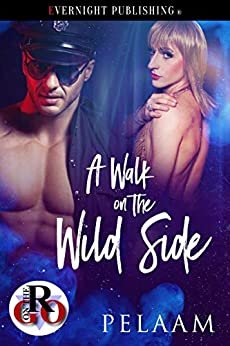 Hello Pelaam!  Thank you so much for visiting Written Butterfly with me today!  It’s such a pleasure to chat with you.  So tell me…

Can you tell us a little about your book?

A Walk on the Wild Side is a re-release and short contemporary story with opposites attracting. It was originally in an Evernight Publishing anthology.

What is your writing process?

Do you outline, write by the seat of your pants (Pantser) or a combination of both?

I rarely plot things out, even longer stories. Sometimes they take on twists even I don’t expect and secondary characters come to the fore.

Do you have a ritual when it comes to writing?

Example….get coffee, blanket, paper, pen, laptop and a comfy place. I do most of my writing in my bedroom with a view out over the Tasman Sea. I also like to have an old, favorite DVD playing in the background, so that when I take a break, I know exactly where I am in the film or program and it doesn’t distract me while I work.

If you could choose, which published author would you like to brainstorm with and why?

I’d love to spend time with Dean Koontz or Alan Dean Foster. I love their world building, the characters, and the fantastic tales they tell. My favorite books for each are Watchers and Midworld.

What future projects are on the horizon for you?

I’ve written the first in what I’m hoping will be a series of Steampunk AU with a team investigating reports of cryptids. In the AU, these creatures exist, and, if friendly are left in peace, but if dangerous need to be dealt with.

FAN READER QUESTIONS: How did you decide on your genre?

The genre depends on the Muse. I write predominantly steampunk/sci-fi/paranormal/fantasy. But I also write contemporary and horror.

Where do you find your inspiration?

I read books on myth and legends, research mythical creatures and monsters from other cultures, and read in those genres I most enjoy. Inspiration can take the form of a sentence, a song (title or lyrics as well) or an image.

By day, Devin is a staid systems analyst, but at the weekends, he becomes Miss Teaque, singer and drag queen.

Driving a little too fast to get home, he’s stopped by the police, and in Devin’s eyes, the big man in uniform is a walking sex god.

Justin is as smitten as Devin and traces him to the bar in which he’s performing. The only dark cloud on their horizon is Devin’s selfish and domineering mother. Caving in to her demands causes the couple to argue. Devin is heart-broken, but since he knows it’s his own fault, he can’t bring himself to call his handsome cop.

Has he lost his chance of happiness?

The flashing lights of the police car sent Devin's heart plummeting. His gaze dropped instantly to his speedometer and he groaned softly. He indicated, slowed down, and pulled over to the side of the road. He knew he'd been over the speed limit. Admittedly, not by much, but obviously enough to catch the attention of the vigilant policeman now headed his way.

Another groan escaped his lips, but for a completely different reason, as he watched the cop approach. The man heading toward him was tall and broad, filling out the uniform in the best of ways, and fueling Devin's uniform fetish.

Tearing his gaze away from the policeman, a soft whine escaped Devin's lips. Lips that were still covered in pink lip gloss that accompanied the rest of the makeup he wore. He looked at his legs, slim, tanned, and bare. He hoped he wouldn't be asked to step outside of the vehicle.

The cop tapped on his window. Taking a deep breath, Devin lowered it, and greeted him with his best, fake, smile.  "Is there a problem, officer?"

A deep chuckle made Devin's cock react. He prayed it didn't tent the leather covering his groin.

"Well, unless there's a fire somewhere I don't know about, you were making pretty free with the speed limit."

"I'm sorry. I'm late leaving to get home, and I guess I wasn't as vigilant as I should be over my speed."

The cop nodded. "I see. And where is home? You have your license handy? I'd like to check your name and address."

Fishing out his license, Devin handed it over, and rattled off his details as requested, knowing the innocuous instrument in his policeman's hand would check his breath for alcohol. Thankfully he'd declined that last drink, so he was confident there wouldn't be an issue in that respect.

Putting his breathalyzer away, the cop looked at the license, then back at Devin and frowned. "That's a good hour and half or so from here."

Devin nodded. "I was up here visiting."

The scowl on the cop's face worried him. Was he going to be given a ticket?

"A word of warning. The next time you visit, be sure to keep to the speed limits. The next cop may not be as… amenable."

The words were out before Devin could stop them.

"Really? That's interesting." Another chuckle from the cop had Devin trying not to writhe. "Eager to get away?"

"No. Not at all." Devin felt the heat of a blush flame his cheeks, but the cop didn't comment. Instead he straightened up and started to walk away.

Then he stopped and came back to the car. Devin was sure his heart was going to give out. Had the cop just been lulling him into thinking there'd be no ticket.

"Forgot to tell you." The cop bent down, his face coming close enough to Devin for him to catch a brief scent of the cologne the other man wore.

The cop's voice seemed to be much deeper, although $ wasn't sure if that was just his hyper-active imagination.

"Yes?" his own voice was breathier, doubtless from the shallow breathing which was all he was capable of.

"Nice legs." The cop winked and walked away.